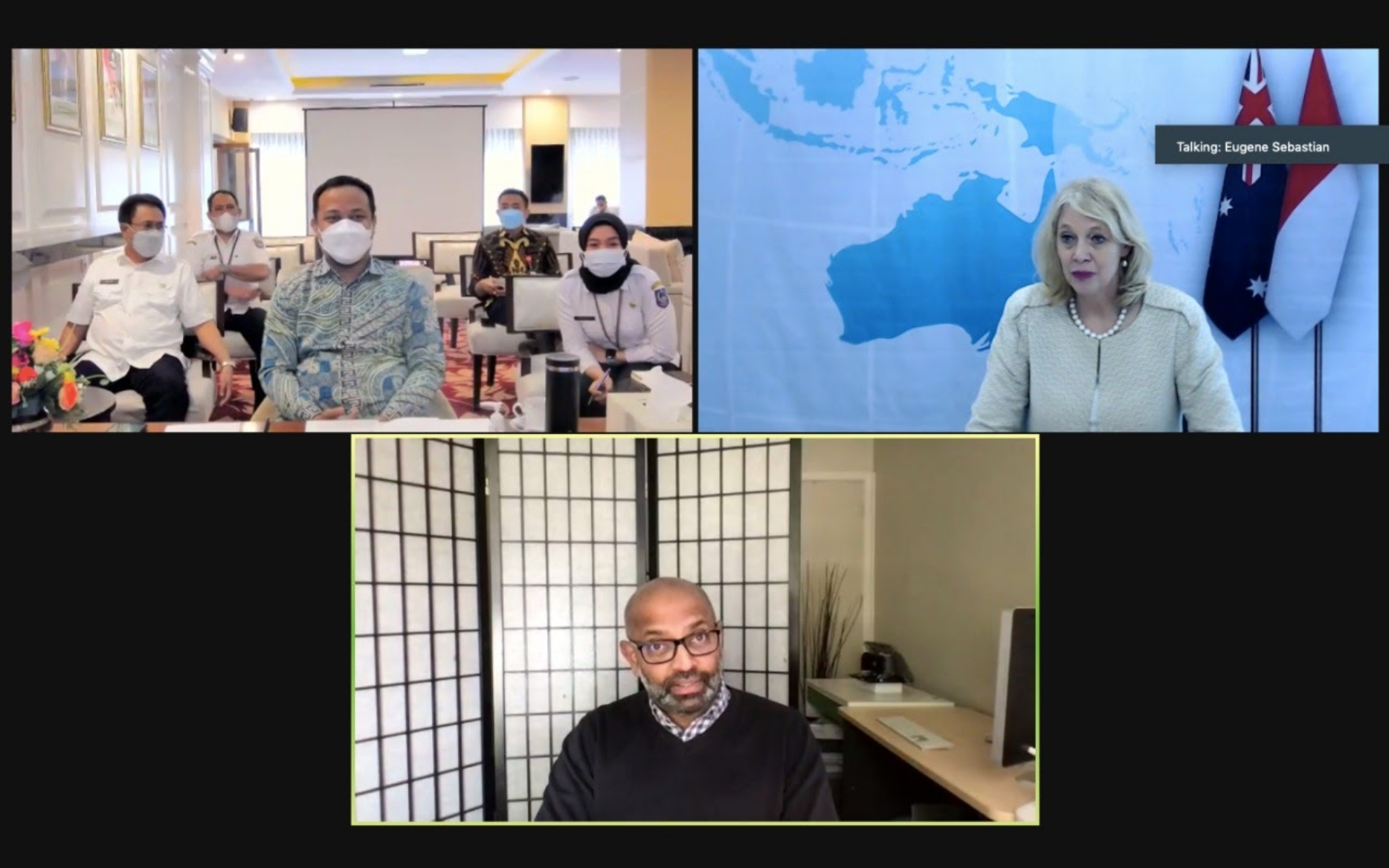 The Australia-Indonesia Centre and the government of South Sulawesi have further progressed their partnership by agreeing to establish a joint working group which puts a focus on the areas of health and wellbeing, and the local economy.

It was the first meeting between the AIC Executive Director Eugene Sebastian (above image, bottom), the Acting Governor of South Sulawesi, Andi Sudirman Sulaiman (above, top left) and the Consul General Australia in Makassar, Bronwyn Robbins (above, top right), and set the direction for a joint working group following the Memorandum of Understanding signing late last year.

The Acting Governor said that health and the impact of COVID-19 was a priority and he wanted to improve intervention and prevention measures.

Mr Sulaiman said he would like to use a combination of regulatory and behavioural change to develop herd immunity in the population.

“During the first wave, South Sulawesi is always in the top three of five places, even in second place in terms of the number of positive COVID-19 cases every day. Sulsel has learnt from the last year and is improving policy,” he said.

Executive Director Eugene Sebastian explained how the Australian-supported Partnership for Australia-Indonesia Research (PAIR) has been conducting multiple rapid research projects on the impact of COVID-19 in different areas of Indonesia, and the findings could be used to help with policymaking around one data, digital technology, health and safety programs and behavioural change.

“We are also doing some modelling that will help policymakers to not have to choose between health or the economy,” he said.

Acting Governor Sulaiman outlined that commodities, tourism, trade and connectivity were important to the province’s future and the meeting discussed the research already being done in these areas.

The AIC’s main research program has been working in the province of South Sulawesi since 2019, on four areas of critical importance to its economic and social development. The Centre’s research teams have been studying the benefits of a new railway line currently under construction, and improving the productivity and sustainability of the seaweed industry.

It’s work on the development of an integrated, effective and efficient rail transport system also aligns with South Sulawesi’s focus on finding domestic and export markets for its rice, shrimp and cacao products.

The program, called the Partnership for Australia-Indonesia Research (PAIR) has also been investigating issues around young people, health and development, including people with a disability.

This work ties in with the provincial government’s desire to improve human capital.

According to Eugene Sebastian this work also provides the opportunity to show that evidence-based research by universities, in collaboration with policymakers, can improve the quality of decision-making.

“This forward step reaffirms the importance of PAIR’s place-based model that helps to deepen connections with senior leadership and policymakers.”

“These deeper connections allow us to create pathways in which the evidence we produce has the potential to gain some traction,” he said.

“PAIR’s work in South Sulawesi has produced a lot of interesting research which I understand has the potential to play a key role in improving the handling and recovery of COVID-19 in South Sulawesi, not only from a health perspective, but also socially and economically,” Ms Robbins said.

Since the beginning of the pandemic, the Australian Government has been working in partnership with Indonesia to support COVID-19 recovery and response.  Health support has included A$12 million for oxygen – related and other medical equipment including 1000 ventilators; over 40,000 rapid antigen tests; and 2.5 million Astra Zeneca doses in 2021.  This package builds on Australia’s A$1.5 billion loan to support COVID-19 recovery and economic resilience; and A$101.9 million in support of Indonesia’s national vaccine roll-out through a regional COVID-19 Vaccine Access and Health Security Initiative.  Australia also re-oriented its long-standing development partnership to COVID response, and has contributed A$130 million to the COVAX Advanced Market Commitment which supports the vaccine needs of Indonesia and other participating countries.

The Australia-Indonesia Centre is a joint initiative of the Australian and Indonesian governments, leading universities and industry established in 2014. The Centre’s mission is to advance the people-to-people links in science, technology, education, innovation and culture. In December 2020, the Centre and the Provincial Government of South Sulawesi signed a Memorandum of Understanding which directed the formation of a joint working group to guide the collaboration.

The AIC is grateful for the support given by all parties.

“We would like to thank Acting Governor, Andi Sudirman Sulaiman for the support, and Bapak Dr Andi Aslam Patonangi, Ibu Dr. Yumeina Razak and Bapak Hasan Basri Ambarala who have helped in the process of MoU signing. The essence of this work is how South Sulawesi and Australia have a strong collaboration and provide the greatest benefit to the people of South Sulawesi,” said Dr Eugene Sebastian, Executive Director of AIC.

The AIC looks forward to a long and productive partnership with the Province of South Sulawesi.