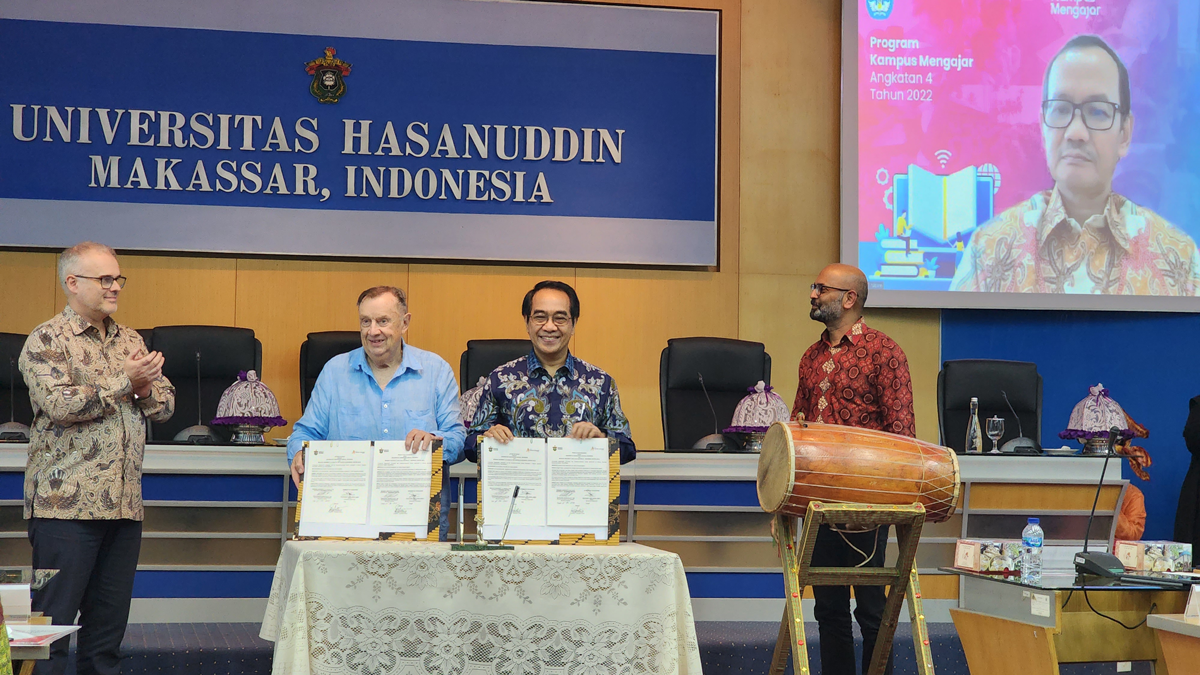 Grand ideas for the development of South Sulawesi and Australia-Indonesia cooperation have been outlined during a conference in Makassar attended by leaders of industry, government and education.

The event was preceded by a performance from the Hasanuddin University choir which performed the Indonesian national anthem and a rousing version of the well-known Australian song Waltzing Matilda.

Universitas Hasanuddin rector Jamaluddin Jompa welcomed delegates, noting the significance of the recent visit to Indonesia by Prime Minister of Australia Anthony Albanese, describing it as “a very good signal” for ties between the two countries.

Professor Jamaluddin spoke of the importance of people to people links across business and academia.

He said the PAIR model helped universities address the challenges faced by policymakers and that the university, known as Unhas, was “proud to be a partner of PAIR”.

He also noted Unhas sought to be a disability friendly university and was working with special needs schools.

In a speech presented by South Sulawesi Provincial Secretary Andi Aslam Patonangi, the Governor Andi Sudirman Sulaiman said his province had abundant natural resources and an annual growth rate of six percent which was above the national average but “we still have room to grow more”.

“This is where higher education comes in. I hope we can collaborate,” the Governor said, referring to the recent PAIR lab announcement.

“We truly understand the importance of collaboration; we need the support of Unhas, PAIR and Australia.”

The executive director of the Australia-Indonesia Centre, Eugene Sebastian, reflected upon the growth of the PAIR project, and how it built upon historic trading links between Makassar and northern Australia, the so-called “teripang” or “sea cucumber diplomacy”.

“Over the last four years, 320 researchers have worked on 44 research projects,” Dr Sebastian said of the PAIR program.

Minister-Counsellor for the Australian Department of Foreign Affairs and Trade, Adrian Lochrin, said Makassar played an important role in the Australia-Indonesia relationship.

Mr Lochrin said it was significant that Prime Minister Albanese visited not only Indonesia but Makassar soon after taking office reflecting “a commitment beyond Jakarta”.

He noted a significant bilateral economic agenda, with a delegation of Australian superannuation funds visiting Indonesia in August.

“Prime Minister Albanese has high ambitions for the economic relationship [and the] sharing of knowledge for applied problems is very relevant,” he said.

“The PAIR team has briefed the embassy on the program with Sulsel and the PAIR vision aligns with Australia’s.”

The summit included two panels, one focusing on transport and commodities and the second on young people, both chaired by PAIR research coordinator Nana Saleh.

Panellist and Australia-Indonesia Centre senior fellow, Nyoman Pujawan, spoke about the South Sulawesi railway and how there was strong interest among the travelling public in both Makassar and Parepare.

He also noted the proportion of freight owners interested in using the line is far below the level of interest among potential passengers. There was also discussion about intermodal terminals, smart systems and integrating the railway with the public transport plans of cities along the lines.

Ecotourism was also discussed, including making the wetlands around Rammang-Rammang more accessible.

A discussion about commodities covered the seaweed industry’s potential to transform lives and communities along the way, with small operators previously dependent upon fishing now more affluent in managing seaweed harvest and export.

“The transformation happened only in the last few decades. Their lives have been transformed for the better,” Professor Ilyas said.

The discussion also reflected upon sustainability, and how Indonesia could become like France as a producer of cosmetics from seaweed.

“From the data we observed… the majority of youth don’t finish junior high school,” she said.
“The question is, what kind of job can they take?”

Dr Suwarso said education culture was important in encouraging young people to improve themselves and noted the importance of vocational schools in allowing them to upskill in an era of technology, especially via online courses.

AIC senior fellow Sudirman Nasir spoke of health services and the vulnerability of young people, as well as the potential for using village funds for mental health services.

Looking to the future

Chairman of the Australia-Indonesia Centre, Harold Mitchell, spoke following the panel sessions, thanking the universities that contributed to the forum, saying “nobody has looked backwards – everyone has looked forward”.

Mr Mitchell said rail could help open up Indonesia, as it had done in the United States of America and encouraged Indonesia to “see the future” and to process seaweed domestically and sell it, rather than export the raw commodity to China.

“Today we have seen laying down a base for the future. So many of those speakers spoke from their heart – wonderful, incredible, confident people,” Mr Mitchell said.

“By the year 2050 Indonesia will be the fourth biggest economy in the world. It is in the hands of people in this room and the youth at universities.”

The head of South Sulawesi’s development agency, Bappelitbangda , wrapped up the event. Andi Darmawan Bintang expressed appreciation to the Australian government and the AIC and to all those who “exerted efforts and energy to make Sulsel better”.

“The Sulsel government will adopt the evidence of this research and start to include it in the mid-term development plannings, including in a range of offices,” Mr Bintang said.

“The Sulsel government has paid close attention to the areas of PAIR. Thanks again for your work and I hope the relationship continues through the PAIR lab.”