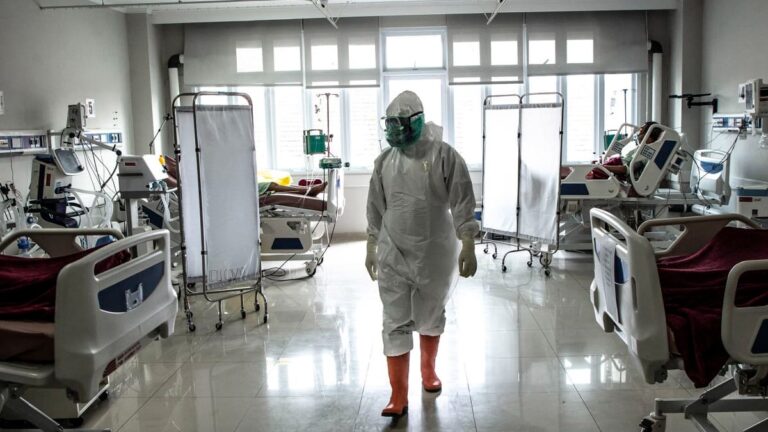 High COVID-19 casualty rates among Indonesian healthcare workers show the lack of resources at many hospitals, an Australia-Indonesia Centre research webinar has heard.

The 2021 PAIR summit also noted that even when hospitals introduced strict protocols, the guidelines didn’t carry through into the community with many Indonesian healthcare workers contracting the virus away from work.

By November 2021, 2066 healthcare workers had died according to the national medical association, rising from 718 in March before the Delta variant wave had hit.

During the discussion, some key points were raised:

“I think the most important [issues] are the discrepancies between different hospitals.

“And this is very important because the discrepancy between hospitals actually affects the number of staff who can be exposed to the infection of COVID-19.”

He said that in one hospital they examined, all the staff were fully provided with PPEs, but in other hospitals the staff had to buy their own PPE.

“And when they can’t afford to do so they have to reuse some PPEs they’re supposed to be disposable.”

Professor Prajogo said there was also an issue over the treatment of infected staff, with some hospitals providing special facilities, but others having no option other than send staff home to self-isolate and “fight for themselves”.

He said hospital change rooms had become a key infection site in many instances.

“When the worker has to take off the PPE and change,” he said.

“That is actually an area where the worker should be protected, but becomes a place where many infections occur. So again that is an important behavioural issue.”

And many infections occur outside the workplace.

“This is an interesting part because when the health workers are at the hospital and especially in the COVID area, they become more cautious and vigilant,” Professor Prajogo said.

“But once they go home… then they let down their safeguard and that is where infections can occur.”

“Hospital management needs to consistently remind all medical workers to pay attention to health protocols in order to reduce the potential risk of COVID-19 infections,” she said.

Associate Professor Ansariadi Ancha said more information about the causes of infections among doctors was essential.

“We do know that there are a lot of doctors who get infected when they are at work, but what we don’t know is actually where they get infections and that is a critical question,” she said.

“Because if you want to do some preventive measures we really need to know where they get the infection, whether it is during patient treatment, or other places.”

“So if we are looking at the use of PPE, a younger doctor is more likely to say, ‘I’m protected, I’m perfect’,’ he said.

“But when you actually see what they do, it is likely to be far less effective.”

Professor Reid noted the complexity of working in a COVID-19 environment.

He described reports of risky behaviour such as visiting shopping centres or travelling long distances to visit family was far higher in Sulawesi than in Jakarta, something still to be fully explained.

The session also included mention of pandemic misinformation with Associate Professor Reid noting the “anti vaccination storm” in many parts of the world.

However in his summary of the session, discussant John Leigh, team leader of the Australia Indonesia Health Security Partnership, said Indonesia had done well to avoid the politicisation of vaccination campaigns.

“People still trust governments and I think that is great, there is not the politicisation of vaccines and masks etc,” he said.

While noting ongoing challenges and the risk of complacency, Mr Leigh said there was a “great opportunity for change”, not just in confronting COVID-19 but future health crises.