Home » News » Notes from South Sulawesi: On road and rail from Makassar to Parepare

Notes from South Sulawesi: On road and rail from Makassar to Parepare 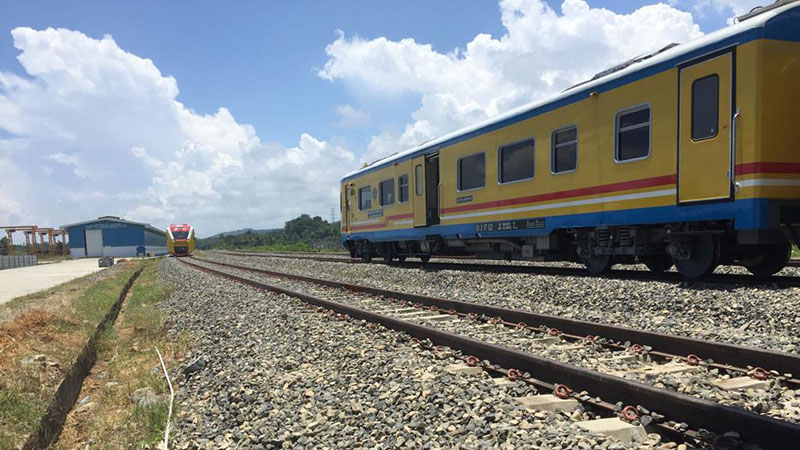 As the AIC prepares to launch its new collaborative research program, the Partnership for Australia-Indonesia Research (PAIR), in South Sulawesi later this year, we took to the road for three days in late March to meet with the communities that live along the trans-Sulawesi highway between Makassar and Parepare. With me were the Centre’s CEO Eugene Sebastian, Indonesia Director Kevin Evans, PAIR Program Manager Leonardo Pegoraro, along with local documentary filmmaker Pak Arfan.

PAIR will focus on communities along the (almost one-third constructed) first leg of the trans-Sulawesi railway line which, when completed, will allow travel between Makassar and Parepare in 1 to one and a half hours. As we discovered, this is currently a demanding three-to-five-hour drive along a very busy highway which is presently the single means by which Makassar is connected with the many communities and agricultural and industrial producers that lie to its north and its east.

The highway is flanked on both sides by small communities, with each perhaps most visibly marked by its local mosque – often displaying beautiful minarets, many of which are decorated with brightly coloured tiles laid in intricate patterns. These mosques are found at 2-to-3-kilometre intervals along the trans-Sulawesi highway, which serves many purposes, carrying everything from large long-haul trucks transporting goods between producers, urban centres and the Makassar Port, to local traffic, including cars and motorcycles (often laden with huge loads) right down to local pedestrian traffic – with children as young as seven or eight walking, often in small groups, along the edge of the road between home and school.

Whilst local drivers exhibit tremendous care, carefully avoiding incident through a combination of skilful manoeuvring through traffic and judicious signalling to fellow road users with the horn, one is left in no doubt that this diverse mix of road users elevates significantly the likelihood of serious and critical injury.

Our party witnessed this first-hand, along a relatively quiet stretch of highway, when a truck ahead of us slowed abruptly and deviated sharply to the right to make a u-turn. A motorcyclist who’d been riding in the truck’s wake, and presumably not visible to the driver, was unable to avoid colliding with the turning truck. Fortunately, perhaps even miraculously, the motorcyclist fell clear of other traffic and appeared to have evaded serious injury.

As we headed north from Makassar, we stopped at the site of one of the future train stations in Barru district. Here we met Pak Arinova G Utama, Head of one Monitoring and Communications Division for the trainline’s construction. He and his team treated us to a test ride on the Executive Train along with an informative presentation on this project. In sharp contrast to our road trip, the train was luxuriously comfortable and relaxing as we glided through vivid green rice-paddies against a backdrop of mountain views on one side and ocean views on the other. The gauge to be used in Sulawesi is also wider than that used in Java. This will allow trains to move faster and also to carry a greater amount of cargo. One was struck by the potential for this train to build South Sulawesi’s tourism industry, not only by providing a safe and comfortable means of moving large numbers of people to tourist sites, but also by showcasing the province’s breathtakingly picturesque landscape as part of the journey.

Given earlier observations of the dangers of the highway it was a relief to learn that the entire railway line is to be elevated with over 120 concrete overpasses removing any of the normal risks associated with level crossings – risks that would be amplified by the fact that this project represents the first railway on the Island of Sulawesi.

We were escorted for a brief tour of the expanding Garongkong Port which, when the train line is complete, will facilitate the shipment of local goods and bulk commodities not only domestically but potentially to international markets as well, in addition to containing a roll-on-roll-off ferry. After this stop we headed further north along the coast road where, explained Pak Arinova, the railway will leave the island and traverse the water for 1.6 kilometres on a 7-metre-high elevated bridge.

This will not only provide commuters with a spectacular view of the protected forest which runs directly along the coast, but will ensure the train line does not cut through this protected forest. A significant engineering feat, the bridge will be the most costly section of the line as there will also be a tunnel built where the line arrives at Parepare City. This short section will cost more than the entire remaining 140-plus kilometres of track.

We parted with Pak Arinova at the site of the future rail terminus in Parepare, some 200 metres from the Universitas Muhammadiyah Parepare Campus. Before leaving, we were warmly greeted by a young academic who, on recognising our Australian accents, stopped us in the car park eager to share stories of his links with an Australian academic based in Melbourne. The astute location for the train terminus, wryly noted by those of us from Monash which has been waiting some 50 years for Clayton Campus to be directly linked to a trainline, will facilitate easy access to university education for the surrounding communities.