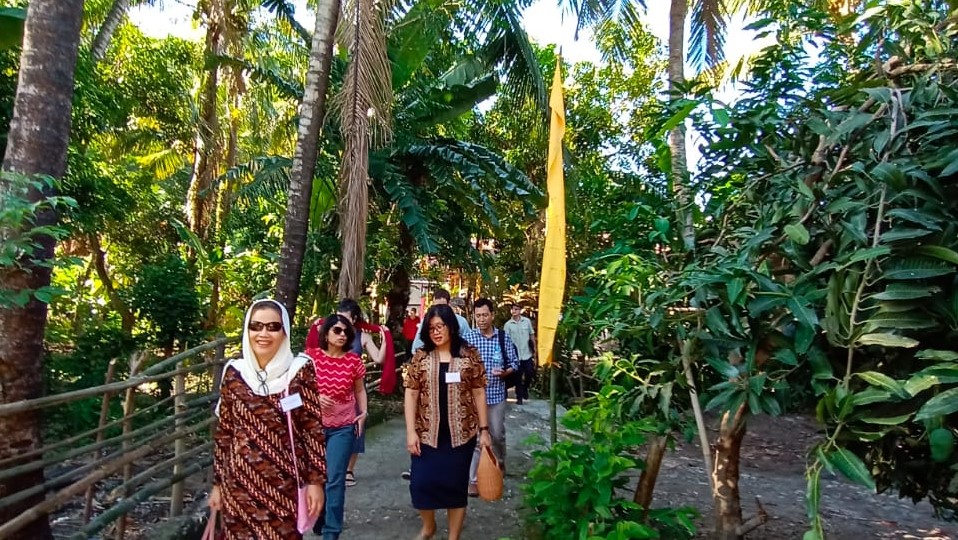 Over four days in November, 11 AIC Senior Fellows explored South Sulawesi together with AIC staff to learn about the issues that will inform their research projects over the years to come.

After their Induction in Melbourne which focused on team building, the research leaders for the Partnership for Australia-Indonesia Research (PAIR), from universities across Indonesia and Australia, were keen to get into the field and start asking questions.

The Discovery Workshop began with the launch of PAIR, hosted by the Governor of South Sulawesi Nurdin Abdullah at his office and residence. Guests from business, government, education and the community listened as the Governor, AIC Executive Director Eugene Sebastian and Australian Ambassador to Indonesia Gary Quinlan declared PAIR to be a touchstone of the future of our countries’ relationship.

Following the launch, our Senior Fellows participated in a roundtable where they heard from Universitas Hasanuddin researchers about the work they are doing on commodities, transport and young people, gender and disability. Covering commodities were Dr Nita Rukminasari who spoke about seaweed and Prof. Dr Ade Rosmana who presented on cocoa. Dr Muhammad Isran Ramli spoke on transport; a topic crucial to our understanding of the new Makassar-Parepare new railway line. Dr Ansariadi discussed the topic of young people, while Dr Mardiana Ehtrawati Fachry spoke about gender and disability.

The group’s first field visit was to ports operator Pelindo IV. From the office there researchers viewed the passenger ferries and cargo ships at Paotere port, and listened to a presentation about Pelindo’s plan for Makassar New Port and its integration with the new railway line. We then visited the community port and met with local crew and workers, including those on a small ship from Flores that had transported cashews to Sulawesi.

Lastly, the group donned high-vis and hardhats to tour the Makassar New Port, which is still under construction but has already facilitated an 18 per cent increase in operations since its soft launch in 2018.

From there our group started the journey up the train line and met with representatives from the Bupati’s office in ‘Pangkajene dan Kepulauan’ (Pangkep) district. Researchers learnt about the key commodities in the district, their plans to improve education and human development, and the challenge of ensuring a district that incorporates a large number of small islands will benefit from connection to the railway line.

Our next stop was a visit to a seaweed farming collective in Desa Pitue, where we received a very warm welcome from villagers in the form of smiles and selfies. Over a cup of sarraba (a traditional drink from South Sulawesi made from ginger, coconut milk, palm sugar, pepper and sometimes egg) and a delicious spread of snacks, the researchers heard from Ibu Hasrawati Karim, who was elected head of the collective. Previously the village was involved in fish farming, but after limited success it moved to seaweed farming. Ibu Hasrawati discussed the schedule and process of seaweed farming, and the snacks the group makes to sell.

After spending the night in Parepare, we travelled to Mangkoso in Barru district to meet a group of cocoa farmers and visit their plantation, where farmer Pak Isran explained the harvesting process and crop yields. Later, as we sipped on fresh coconut juice, the researchers heard from the village head and farmers about traditional farming methods and the roles that men and women perform in the farming process. Cocoa isn’t the only crop grown here; there is also rice, cattle, corn and other fruits and vegetables. The variety of produce grown locally ensures the village is self-sufficient.

Our next meeting was with representatives from the Bupati’s office in Barru, who outlined their aims to improve welfare, increase investment and improve infrastructure. The representatives were hopeful that the new train line would increase mobility for people in the district, and therefore increase their livelihood and welfare. They also emphasised the importance of connection between universities and local government in developing evidence-based policy, and welcomed the efforts of PAIR.

There was a feeling of excitement as the research group reached its next destination – the train line. After hearing so much about it, we took a trip on the demo train that starts in Pekkae, Barru and runs along the small section of track that has already been built. As we passed through the beautiful South Sulawesi landscape of fields, villages and karst mountain ranges, the group heard from a chief engineer on the project about the plan to connect the railway to other modes of transport, the project’s environmental impact, and lessons from a rail project in Java that have been applied in Sulawesi.

The last stop for the day was a quick visit to a seaweed farming community in Barru. Researchers and AIC staff sampled locally-made dry seaweed snacks produced by the village’s home-scale enterprise and sold on Tokopedia. The group observed as women seeded ropes to be cast into the ocean to grow seaweed, and learnt about the production and harvesting process.

The final meeting of the Discovery Workshop was with the Governor’s Accelerator Team – a team of academics assembled to implement the Governor’s priorities for the province – and the regional development planning agency, Bappeda. Chaired by Professor Jamaluddin Jompa, the roundtable discussion focused on fisheries, transport, cocoa, education and health.

In the afternoon the researchers re-grouped to discuss all they had learnt during the week, potential project topics, and their ideas for the next stage of PAIR.

The challenge going forward will be to understand how to manage the different perspectives of stakeholder groups, and what PAIR’s role is in helping the groups meet their aims.

For example, farming communities use local knowledge and traditional farming techniques to grow a range of crops to secure their village food supply. How can this way of life co-exist with the local government’s ‘one village one new product’ strategy, which focuses on the optimisation of a particular crop for production in each village? When Universitas Hasanuddin researcher Dr Mardiana pushes for more inclusive public spaces for women and people with disabilities, how will this be incorporated into the development of new train stations?