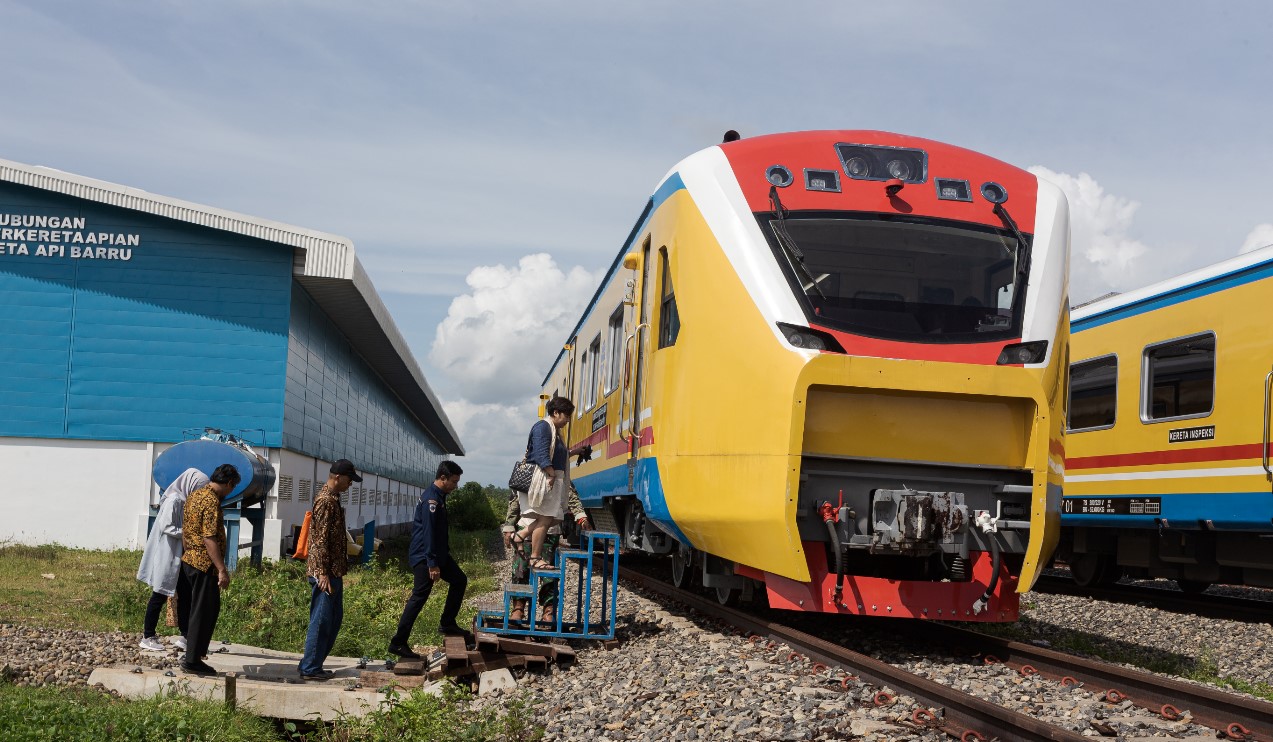 Researchers working on transport infrastructure have been out meeting communities in South Sulawesi to learn about their views of a potentially transformative rail line.

Their work is part of a project to study the new rail link being built in the province between Makassar and Parepare and how it can connect with both urban and regional areas.

It is expected to benefit government planners in progressing from building physical infrastructure to establishing transport services and setting in place the policies to encourage people and business to use the railways.

Researcher Professor Nyoman Pujawan said work was ongoing with key findings to be integrated into a central report.

“We expect our research to be an important policy guide going forward,” he said.

“This is a good time to be doing research as the project is still new and policy changes can be made with relative ease.”

Also being examined is how an efficient transport system could improve the competitiveness of regional commodities and provide greater opportunities for young people living in local districts to access employment and services.

While the railway is expected to contribute substantially to the local economy, it is also likely to have congestion challenges to overcome being one single line for the movement of both people and freight.

That survey found close to 90 percent of 869 respondents would be willing to use the rail line when it is completed.

Co-researcher Amelia Santoso said the study “provides evidence that a large majority of potential travellers believe a rail line is a viable option for commuting or for other travel reasons”.

“This provides evidence that a majority of people in the Makassar – Pare-Pare area who are interested in the new rail line and who want to use it would be willing to pay for their travel with a fare about Rp10,000 or less for a journey,” Ms Santoso explained.

Based upon survey results, the researchers prepared a document outlining total passenger demand in an ‘optimistic’ scenario, with 8000 to 9000 tickets sold a week (around 1500 per day), four train journeys per day and with passengers paying a ticket price of less than 7500 rupiah per journey.

This would require in the order of five to six carriages per train.

Separate research by Professor Siti Malkhamah of Universitas Gadjah Mada has examined freight movement. Notably, the optimal location of intermodal freight facilities along the line, with a focus on minimising the cost of transporting both raw and processed products.

Cement has been discussed as one commodity requiring rail transport, albeit Professor Nyoman said this would depend upon a key customer.

“So it is likely to be a significant quantity of cement, or nothing at all,” he said.

“For freight, we do need to recognise that its key advantage is usually in terms of long haul whereas this line is in the order of 140km so we are probably looking at a project with more significance for the movement of people.

“That said, it is possible the line could be extended in the future.”

Additional research has already highlighted the need for public transport connectivity to fully utilise the project’s potential, noting that a “railway track is of no use unless it is embedded in a well-connected transport system for freight and passengers”. Potential bus routes also have been developed with a view to connecting stations with population hubs.

The researchers stated that it was important to design access to the rail line to ensure it was competitive with private transport, with good planning required to consider the design of infrastructure, interconnectivity, scheduling, and risk assessment and mitigation strategies.

Comparisons were also made of journey times involving an entirely road journey versus one involving road (bus) and rail. Public transport was still found to be slower, but the longer the journey the more competitive rail became.

Small towns in the east, it has been noted, are uncompetitive, while public transport is much more attractive close to Parepare.

It was noted that “ongoing work” would be required to better evaluate just how frequently passenger trains could run, given the need to take into account single track capacity restriction and the requirement to fit freight trains onto the network.

Further research into maximising the effectiveness of the railway was prepared by Dr Tony Susanto as part of a connected report entitled Smart City Masters Plans – Towards Integrated Railway Transportation Systems.

This research has sought to encourage and facilitate transport systems with the railway across five regencies and cities.

Workshops have been held to both better understand the current state of master planning in Makassar and assist in the development of improved master plans. These have already identified that mobility is crucial so that there should be a strong link between the master plans and the work of researchers.

An early or ‘preliminary’ finding from master plan research is that road transportation to and from the port in the Makassar urban area is a major bottleneck, with narrow urban roads that must be negotiated by large trucks.

Researcher Ainul Yaqin said safety and safety perceptions would be significant in determining the success of the project.

“We noted that 77 percent of respondents said rail transport was safer than alternative modes,” he said.  “So that is a significant advantage for the future.”

He noted that figures about demand were still tentative and that output models may change.