Home » News » The launch of PAIR in South Sulawesi: the next chapter for Australia and Indonesia

The launch of PAIR in South Sulawesi: the next chapter for Australia and Indonesia 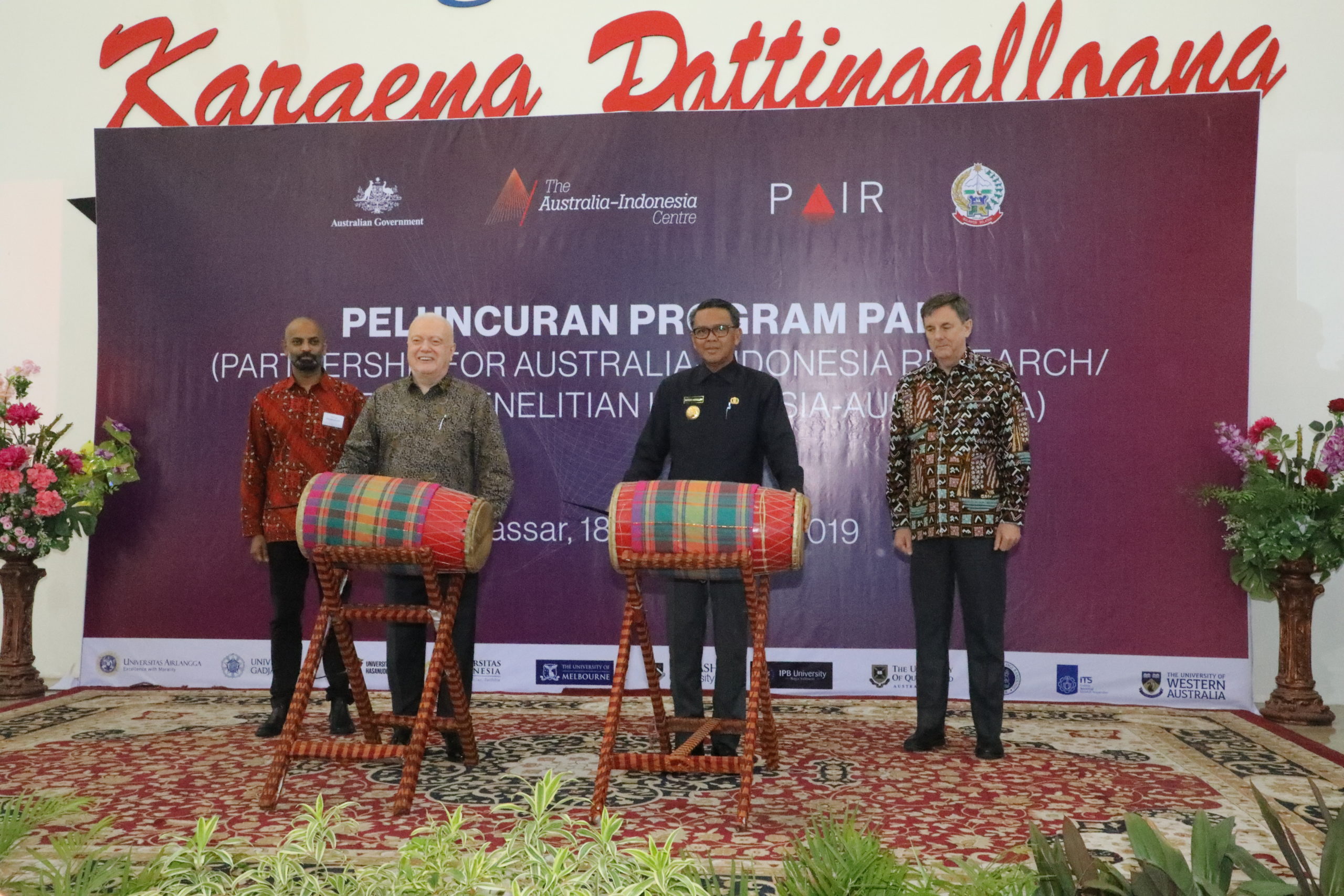 Drums thundered through Baruga Pattingalloang at the Governor of South Sulawesi’s Office and Residence to launch the Partnership for Australia-Indonesia Research (PAIR) in Makassar on the morning of Monday 18 November 2019.

Played by Governor Nurdin Abdullah and Australian Ambassador to Indonesia Gary Quinlan, the drumming marked the beginning of three years of PAIR in South Sulawesi, supported by the Australian and Indonesian governments.

Guests from both governments, industry, academia, communities and the Australia-Indonesia Centre (AIC) were welcomed to the launch by a traditional South Sulawesi dance performance featuring the bright colours of the province. For many of the 11 Senior Fellows from Australia and Indonesia who will lead PAIR research projects over the coming three years, this was their first taste of South Sulawesi.

After a singalong to the Indonesian national anthem ‘Indonesia Raya’ and a screening of the PAIR launch video, representatives from the AIC, the Australian Government and the South Sulawesi Provincial Government all spoke highly of PAIR as the next chapter in Australia-Indonesia relations.

AIC Executive Director Dr Eugene Sebastian introduced the audience to the AIC, and particularly PAIR, as a platform for long-term structured collaboration between Australia and Indonesia. He outlined the unique and ambitious framework of PAIR research, bringing together government, business and communities to tackle real-world challenges. He emphasised the AIC as a research incubator and catalyst, with the ability to connect small projects with partners and funding to up-scale them and deliver high-impact results. The AIC is approaching PAIR projects in South Sulawesi with this aim in mind. You can read Dr Sebastian’s full speech here.

Governor Abdullah Nurdin was excited to launch PAIR, declaring the day a historical milestone for the Australia-Indonesia partnership. He professed his support for the program and signalled his government’s willingness to cooperate on projects as educational institutions, he asserted, are a vital resource in the policy making process. ‘I hope this PAIR program will be a motivation for us to continue to develop and advance together’, Governor Nurdin said.

Read about PAIR Workshop #1 in Melbourne

Read about PAIR Workshop #2 in Makassar

Ambassador Gary Quinlan reiterated his support for PAIR, emphasising the program’s integration of sustainability and a multidisciplinary approach. He recognised the long and rich history that Australia and Indonesia have together, saying ‘It is exciting that we are launching this program in Makassar – the place where the Australian and Indonesian relationship began 400 years ago.’ He added that PAIR represents the future of this relationship, as an important vessel for collaboration between our two countries.

After the formalities guests took the opportunity to mingle, take selfies and sample some South Sulawesi snacks. There was genuine enthusiasm from those in the room to connect with each other and work together; an encouraging sign for the success of PAIR over the next three years.